Farming in the Sundarbans region is typically rainfed, constrained by hostile and challenged ecosystems, and is characterized by low input use and poor crop productivity. The male farmers, due to fragmented land holding and frequent crop failure (as a result ofbiophysical constraints, and extreme climatic events), are compelled to migrate to different districts of West Bengal, to other states, or even to other countries to sustain their livelihoods. Their female counterparts are ‘left-behind’ in the villages and perform a wide array of works, both domestic and farm-related. Domination, deprivation and discrimination, along with lack of recognition and remuneration for tremendous workload are common for these left-behind women in a patriarchal society. But, this expansion of gender role may slowly and consistently lead to autonomy of marginal women in this marginal land. A conclusive assertion, however, asks for scholastic empirical engagement.

This short excerpt is taken from research conducted as part of a master’s dissertation work in the field of rural development. The study is placed within the context of ‘migration left behind nexus’ literature (Toyota et al. 2007), which focuses on the life experiences and well-being of the women living at the origin during their husband’s absence. The aim of the project is to understand the effect of male out-migration on the lives of left-behind women in selected areas of Indian Sunderbans.  The existing literature under the ‘migration-left-behind nexus’ is more engaged with transnational migration (Sarkar and Islam, 2014) and very few of them explicitly deal with circular and recursivemigration, a common feature in many developing nations, owing to the seasonal nature of their farming. Moreover, attempt to understand the impact of male outmigration within the framework of women empowerment has been largely absent (Sinha et al., 2012).

A systematic review of literature using reputed bibliographic databases resulted in the mapping of relevant literature on male out migration (Fig. 1) 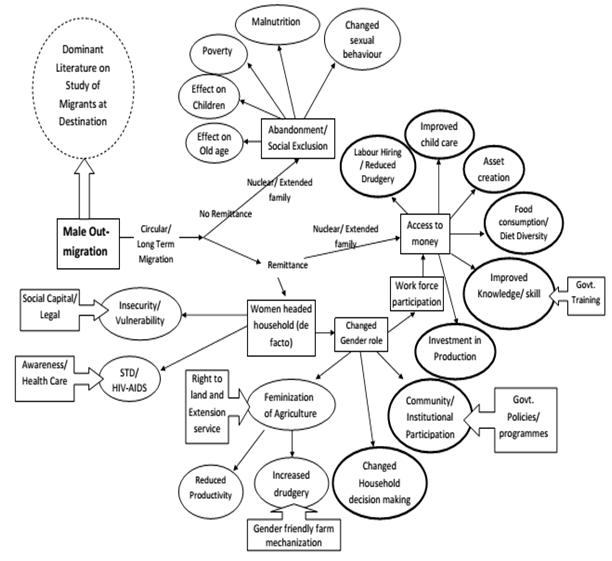 The study employed ‘Grounded Theory Methodology’ (Charmaz, 2006) as a qualitative research strategy for capturing everyday lives, perceptions, and feelings of women left behind at the sources. It followed ‘theoretical sampling’ where concepts related to the phenomenon in question was selected rather than the selection of respondents. A series of in-depth qualitative interviews was conducted with the left-behind women of Patharpratima Block of South 24 Parganas district during April-May 2015. This was supplemented by focus group discussions with self help group (SHG) members of the studied community.

Since the study tries to capture an emerging and dynamic causal loop of migration-led change in gender role and its effect on women’s empowerment, it also takes into consideration the intervening factors that are in complex interplay with this evolving process. Of these, this present paper focuses only on the change of gender roles and the resulting empowerment, if any, of women and explains some of the extraneous factors that influence this process (Figure 2). Much of the nuances of the analysis were lost in the severe shortening of the research findings, and the following simply indicates the barebones of it.

Generally, it is found that women belonging to a nuclear family enjoy greater autonomy than those in a joint family (Desai and Banerjee, 2008). Unlike the joint extended families, where the ‘official’ works such as visit to banks, cooperatives, panchayat etc. are either executed by the brother in-laws or by the father-in-law or the mother-in-law (in case she is a widow), women deliver these responsibilities in nuclear families, 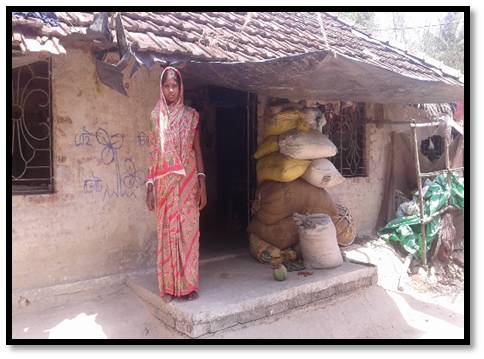 (A participant in this research. Photo: authors)

The work of women farmers are similar to their male counterparts, ranging from clearing the land, pesticide and fertilizer application, to harvesting and trading. Since she resides in a nuclear family, she has to deliver all the household responsibilities along with field works. It is not only the work in the field (physical labour), but the authority to take decisions regarding selection of inputs and selling of marketable surplus, that is potentially connected to empowerment. However, this ‘structure of family’ is sometimes overshadowed by other overarching factors such as ‘poor economic status of the woman’s family’ and her ‘education’. This is evident from the statement of this woman,

“My condition would have been same, does not matter whether my husband stays here or is absent. I used to do this at my parental home too, since I am from a very poor family and also the most educated among the siblings. I used to …visit to baazar or any sort of work……eh…..my brothers did not go to any office and did not know how to do all those works, they were always dependent on me…going to bank, applying for name change in ration cards in BDO office, submission of complaint in electric office…here also, in this house, I do the same…I don’t depend on my husband ” (M K, 10.04.2015). 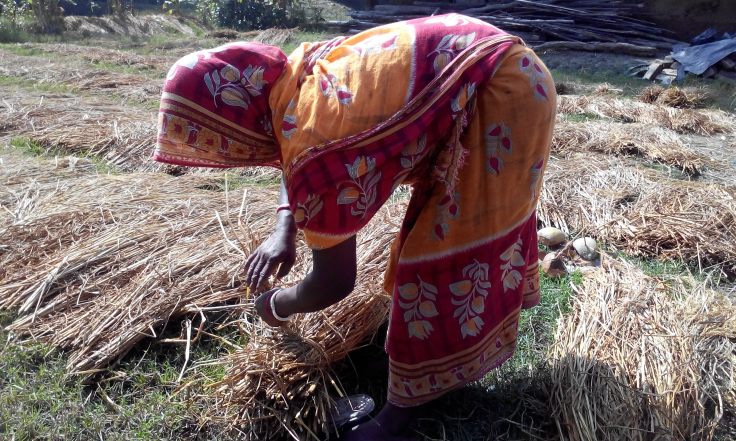 (A participant in this research. Photo: authors)

Affiliation to ‘social group’ is another factor that influences the gender role. But, it is difficult to establish its interaction with migration-induced empowerment, since the SHG constitutes of both women belonging to migrant and non-migrant families. SHG is a vital instrument in women’s empowerment and is also an important consideration in the context of migration. Membership in SHGs enables a woman to participate in community level activities such as plantation, combating social evils (such as alcoholism) collectively. Hence, while migration of husbands results in household-level role performance of women, membership to social groups catalyzes the expansion of her role at the community level.

“Along with the small purchase, sometimes I used to buy gold jewellery worth Rs 5000 – Rs 8000, I don’t let him know…..after a while, I inform him” (M M, 12.05.2015). This wife of a migrant lives in a nuclear family and enjoys greater autonomy in large purchases. It is also extremely crucial to consider the perspective of men to judge perceived empowerment of women left behind, since they are the closest witness of such change.

This man is a long term transnational migrant, staying eight years in Dubai. He stayed away from the family for a long period of time at a stretch, and can in fact recognize and acknowledge the positive change in his wife manifested through performance of greater family related roles and responsibilities. This independence is arguably correlated with the type of migration – short term or long term. The longer the absence of husband, the higher is the probability of changed gender role and subsequent empowerment. 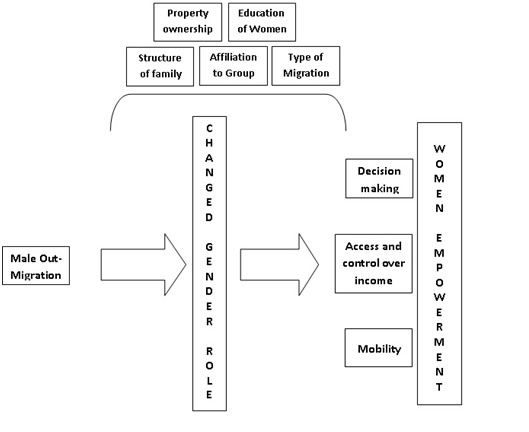 In the field study, we found that empowerment of women left behind seemed to be happening in a more explicit way along three dimensions: a) Household decision making; b) Access to and control over income; and c) Mobility.

Paid work and education increase economic decision making ability of women at the household level (Malhotra and Mathur, 1997). We find very few women wage earners are enjoying absolute economic decision making power; if decision is to be taken on low priced items or items required on regular basis, women can make instant decisions; but, for large household purchases, women prefer taking consent from their husbands since they are the ‘bread earners’. ‘Price of the item’ and ‘daily necessity’ – thus – influence autonomy in household decision making. However, women who are in a nuclear family and/or from a ‘rich’ family background are more likely to take all sorts of household level decisions.

Child related decision-making is one of the key indicators in empowerment studies. Child’s health and education are often considered to be of prime importance and challenge to the left behind women. Literature suggests that husband’s absence results in limited ability of the woman to tackle health related crisis of her child. But, in contrast, most of the interviewed women in our study are not ready to compromise with their child’s future (education). If they feel that their children need a private tuition or remedial classes, they will provide that, even if their husbands are not willing.

Irrespective of the nature and type of migration, women residing in nuclear households have full access to money, but control over husband’s income is contingent upon factors such as span of marriage, type of marriage, socio-economic status of parental home and membership to social group. This dimension is somewhat similar to economic decision making, since ability to take economic decisions is one of the most significant indicators for exercising control over income. “Even if I have access to money but it’s not like that I will buy things in accordance with my will….he is the bread earner so I must ask him” (S M, 13.05.2015).

Noticeably, most of the women, irrespective of any associated factors mentioned so far, never went outside the Patharpratima Block. This happens only when they visit their maternal home. Few women went to Kolkata, the purpose of which was either related to health issues or for visiting close kin. But in the case of the conjunction of male out-migration and nuclear family, mobility was found to be greater:

The empowerment of the ‘left behind’ women is achieved through a gradual but steady change in their gender role. In absence of their husbands, women’s role is expanded and goes beyond the performance of household responsibilities to include farming and community works. Field data suggests that the manifestation of empowerment takes place along four dimensions – access to remittance and control over income, mobility, household and community decision- making and freedom from threat or fear of violence. However, achievements along these dimensions are contingent upon several factors and a simplistic theory or model is unlikely to explain this recursive phenomenon of migration-led women empowerment shaping continuously in the Sunderbans region.

[Sourodeep Bose and  Shatabdi Saha study at Faculty Centre for Integrated Rural Development and Management, School of Agriculture and Rural Development, Ramakrishna Mission Vivekananda University, Kolkata, while Dr. Goswami teaches there. The authors can be reached at goswamirupak@rediffmail.com]