[As a part of my research on Conflict and Social Governance in North East India (Principal researcher Prof. Paula Banerjee), I went to Nagaland for 10 days between May 1 and May 10, 2017.[i] This field report, written immediately after coming back from Nagaland is based on interviews and informal conversations conducted in Dimapur and Kohima.]

It was 7pm on a Monday, when I came out of the office of Morung Express, a well circulated daily of Nagaland, after interacting with one of their journalists, Aheli Moitra. Morung Express has provided a platform to scholars and activists involved in the new protest movements within the state. It was the first day of my field visit and also the first time when fear gripped me. Completely immersed in darkness, the road ahead was deserted, with no transport in sight. Aheli was unperturbed and helped me get an auto, which charged almost double to commute back to the hotel. Answering my protests to the increased fare, the driver said in Hindi, if translated which means, “It’s not safe here madam in the evenings, and you won’t find transport to take you back, so I am charging you double”. “Why”? I asked. “Things are much better now, so why do you say it’s still unsafe”? “Madam, there is no guarantee and the people here (read Nagas) always target the outsiders like us”. The auto driver, Shambhu, was a resident of Bihar. I reflected back to my conversation with Aheli on the same evening, some time back. Aheli is a Bengali by birth, and has been raised in various parts of India, which prompted me to ask, where does she situate herself in the state? Does she feel safe being an ‘outsider’ there? Her answer was, “Of course. More than I would in Bengal. There are no problems in Nagaland, especially regarding the safety of women. There is not a single problem that I have faced in my last three years in the state. I am happy with my work here. Only at times I crave to go back to the proper city life as everything is so quiet here”. From my experience of touring Nagaland in the next ten days, I had to agree with Aheli. I was helped by every stranger I met and interacted with, although a nagging discomfort of working on a subject that rarely evokes empathy remained through out the field work.

Nagaland, flanked by Assam, Manipur and Myanmar is one of the seven sisters in the Northeast India. Being a border state, it has its own history of conflict and movement for human rights against the much debated Armed Forces (Special Powers) Act (AFSPA) in the state. This deviance was however interpreted as defiance and thus Nagaland for long was a battleground. From then, with new ceasefire initiatives in the last few years, the state has come a long way. However myriad forms of fissures and suppressed angst occasionally pose a threat to the government’s idea and practice of peace. New protest movements have emerged denouncing the old protestors, with new demands and political motivations. Amidst a deeply fragmented society, the indigenous customs, rituals and festivals of the state aim at uniting various voices of dissent.

There are sixteen recognised tribes in Nagaland besides the Kachari, Garo, Mikir and Kuki Tribes with different languages. The common language is Nagamese, but that apart each tribe has its own language, custom and festival. The sobriquet of the state is thus rightfully, the Land of Festivals.

My inquiries centred on the larger theme of Conflict, Social Governance and Labour Migration in the state; to examine new forms of political mobilisations and what could be the new forms of disruption of the new logistical apparatuses, if any. The Nagaland Vision document prepared by the Union Government and ministry of the state government promises a new dawn in the state in terms of infrastructure, industrialisation and connectivity[ii].

The field work started with Dimapur, the commercial capital of the state. It is a vibrant hub with businessmen, hotels, shopkeepers and migrants. It is also precisely because of this cosmopolitanism that Dimapur presents a unique demography, effecting in turn multiple fault lines, fissures and frictions. Logistically, Dimapur district is also the major entry point to the state as the airport is located there. Also being situated on the plains, Dimapur, unlike Kohima the state capital, does not require the much debated Inner Line Permit (ILP) from travellers or tourists. Dimapur also provides an easy entrance and transit point. 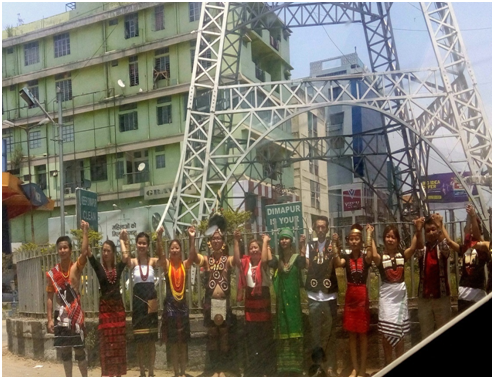 [This is the main city tower of Dimapur, located centrally within the main town area, where important meetings take place or rallies are organised. I was greeted by this sight during my field visit.]

The general consensus is that the society promotes fraternity and welcomes everyone yet one could feel the palpable tension surrounding migrants ‘taking over’ jobs in Dimapur, that otherwise would have belonged to the indigenous people of the state. Most of the local people with whom I interacted told me this, if not directly but implicitly. Indeed in all my auto and rickshaw rides in and around Dimapur, I hardly found one driver/ rickshaw puller who is a Naga. I had long conversations with some of them on work conditions, their union, grievances and their relation with the Nagas. The narratives were interesting from both sides; the migrant workers as well as the locals. The construction labourers in brick kilns are mostly migrant workers. The shops across the streets, especially in the New Market area also mostly belong to or are run by non-Nagas. 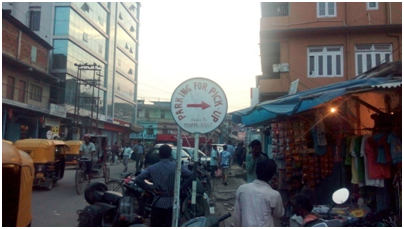 [Entrance to the New Market]

Opening up the state to new investments, infrastructural development and connectivity will naturally implicate inflow of labour from the neighbouring states. How far will this be effective or whether it will lead to new angst and obstruct governance in the region emerges as a crucial question at this hour.

There are other plaguing issues like growing unemployment, concern regarding the increasing spread of HIV, and issue of illegal taxation against which new activist groups like Survival Nagaland and Against Corruption and Unabated Taxation (ACAUT) are waging protests. 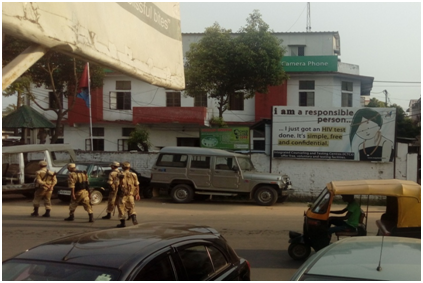 [Hoardings like these were seen in several streets of both Dimapur and Kohima.]

Concern regarding health brings back the focus back to the insider-outsider discord, as Ela Merry, a member of an NGO working on health issues claimed that the border areas are mostly affected with HIV and it is difficult to mark and treat affected persons among the floating population. Prostitution is not recognised in the state which only leads to mushrooming of illegal brothels in the borders and unsafe sex.

In this context, a key member of the Survival Nagaland and regular columnist, Remponi Lotha in a conversation revealed that their protests are not targeted against “mainland Indians” living in Nagaland, but against illegal Bangladeshi immigrants entering into the state from Assam, through the Assam-Bangladesh borders. She alleged, Muslims residing in Karimganj (a border district in Assam) regularly come to Nagaland for work and stay back. Bangladeshis also cross over from the Bangladesh-Assam borders. They manage to make false certificates like fake driving license and other such documents, as a result of which they manage to obtain PRC’s that is, permanent residential certificates in Nagaland and settle there depriving the locals from employment opportunities. This is the reason why the Survival Nagaland demands Inner Line Permits for Dimapur.

I also met representatives of ACAUT like Simon Kelio who briefed about the work that they are doing. ACAUT, like Survival, is also a forum of social activists that has achieved a lot of popularity among various sections in Nagaland. Simon himself is the Vice Principal of S.M. College, Dimapur, and is also the chairman of his colony, the Residency Colony. He, along with his fellow members had lodged a case against the government for illegal taxation, following which a high power committee was formed for investigation as per the Court’s orders. I had the chance to talk to a key member of the Committee, a retired IAS officer, Mr. K.K. Sema. Sema vociferously stressed for the need of unity among the Nagas in order to settle raging disputes in the state and combat issues like corruption. Echoing his words, the chairman of Nagaland Tribal Council (NTC), Theja Therreh whom I met in Kohima, the beautiful state capital in the hills, too claimed “corruption perpetrated by the underground” as the main cause hindering development in the State. Breaking away from the traditional protest movements of the Naga people for independence, Theja claimed that NTC, created in 2013, is not a platform representing the Nagas living outside Nagaland. It is an organisation only for Nagas living within the state.

Nagaland will have its elections in 2018. Few members of the new protest groups I met, not wanting to disclose their identities, revealed their desire to contest the elections, looking for a change of the “corrupt government that survives by placating the underground”. The upcoming election will be an important one with the political party at the centre trying hard to make inroads into the state. Strong anti-migrant measures are also in their agenda. In a nutshell, there are multi-faceted concerns that plague the Naga society at the moment and a number of groups are emerging and working in solving these issues, but their resistance against one another is probably the biggest menace that Nagaland has to find an answer to in order to usher in any change in governance.

[Sucharita is a researcher at Calcutta Research Group and can be reached at sucharitaseng@gmail.com. All the photos are shot by her.]